Written by the students of 2014 Cluster English Listening Class

I. Introduction, written by Park Hae-jeong

I. Introduction, written by Park Hae-jeong

The whole view of a typical Hanok, in Korea


I like to introduce one of the Korean traditional houses, Hanok. It has many environment-friendly aspects, ranging from the structure's inner or outer layout like 어처구니(U-che-gu-nie) to the building materials such as 한지(Hanji). It includes also unique features, such as its special design for cooling the interior in summer and heating the interior in winter, which are called as 대들보(Da-duel-bo), 기둥 (a Korean pillar), 기와 (Kiwa), 아궁이(A-gung-ie), 온돌(On-dol), 초가지붕(Cho-ga-ji-bung), and the like.

Since we Korean have hot summers and cold winters, the 'Ondol (Gudeul),' a floor-based heating system, and 'Daecheong,' a cool wooden-floor style hall were devised long ago to help Koreans survive the frigid winters and to block sunlight during summer. These primitive types of heating and air-conditioning were so effective that they are still in use in many houses now. So these features of Hanok are described here in a row by each member of our cluster class.

Daeduelbo is an important part of Korean traditional house. It is a part of the house’s structure, which supports a roof. It is located between two pillars to support the roof. If the house doesn‘t have it, it will be collapsed. I the West and other countries in Asia, they use an angular girder, a kind of supporter, Daeduelbo in Korean. It shows artificial beauty. On the other hand, Korean plainly use solid wood. So it shows natural beauty with various colors and patterns. It is mainly shown when you visit temples or ancient palaces in Seoul or all over the country. 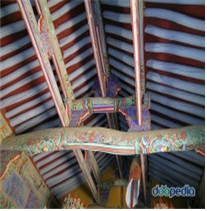 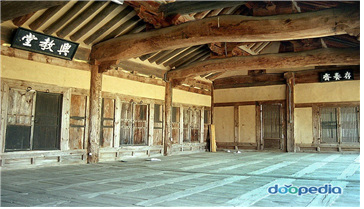 Tongdosa, the renowned temple in Korea

A Korean pillar called Kidung is the structure that supports the weight of the roof. It is the basic frame to form architectural space. Kidung is quite an important thing to get the strength perpendicularly. Kidung is divided into several sections based on its location. Its top is usually called 기둥머리, its middle called 몸통, and its bottom called 밑동 or 기둥뿌리, as you see below. 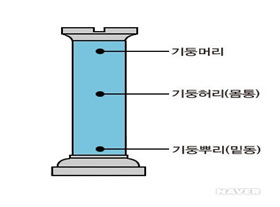 The Main structure of Gidung

The top and middle with the same size as 밑동 are named 직립주. Also, it is called 흘림기둥 that has its sections with many different sizes. Kidung of Hanok is like the backbone to back up our body. So it is very important part in building Hanok.

Traditional Korean roof construction has traditionally used many kinds of natural materials. One of them is represented as Giwa (a kind of tile). 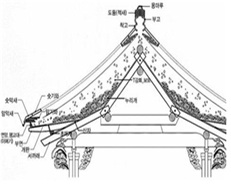 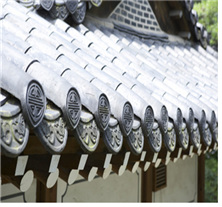 Giwa is a building material for roofing. It is also called Gaewa. Its two basic types are flat and round. Giwa can be made by putting two of these together. Roofs are commonly made by this way. Clay is kneaded and then spread thinly. Then the flat one is extended wider, and the round ones cover the joints of each side from right to left. Giwa is grouped by its materials. Togiwa is made by kneading and baking clay. The cement-Giwa is made by mixing cement and sand. And the metal Giwa is made by cutting and making forms with metal plate.

Byeotjib (Rice Straw) Roof, Chogajiboong (a straw roof) is typically made with byeotjib (rice straw). Byeotjib protects dwellers from hot weather during summer and keeps them warm during winter because it is empty inside, containing lots of air to insulate the house. Moreover, rain falls down well and hardly soaks through a roof because it has a relatively smooth surface. So, a thick roof is not needed. Chogajiboong can give you warm and cozy feeling because of the features of byeotjib. It is put over another byeotjib every year. The soft but strong roof is used like a farm for drying crops like red pepper and planting pumpkins or gourds. 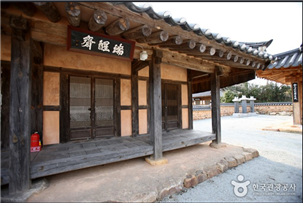 
From the past, our ancestors built a house with materials that they can easily find in nature. Those materials have been stones and woods. They mostly used woods to build the pillars, the roof supporters, the main entrance gate, and the floor. In old times, most of the walls were built with the mixture of earth and hay-rice straw, and Hanji made of natural pulp was glued on Hwangto wall.

Hwang-to with its very find power is well-known as the materials containing oxygen, That’s why Hwang-to is great to purify polluted air and water. Hanji glued on Hwang-to functions as a humidifier or dehumidifier at the same time when it’s dry or wet. Also, it insulates the heat and cold because it contains much oxygen in its overlapped layers.

With eco-friendly materials such as Hwangto and Hanjie, Hanok is so energy-efficient that we as well as our ancestors enjoy hot summer and cold winter today. 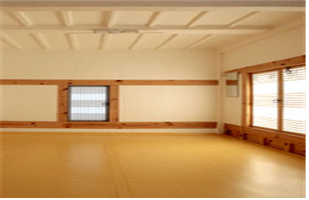 A typical floor with Ondol

An Ondol, also called gudeul, in Korean traditional architecture, is underfloor heating system using direct heat which transfers from wood smoke to the underside of a thick masonry floor. Today, it means any type of underfloor heating, or a hotel or sleeping room in Korean (as opposed to Western) style.

Floor heating is characterized by its use in heating a plain large square rock, Gudueljang heated whirls under floor. But, the disadvantage is that the floor is cracked or broken, smoking can cause gas poisoning with carbon monoxide to threaten the dwellers’ lives. Another disadvantage is that the temperature differs from one spot to another on the same floor. Nevertheless, this floor heating had been used in most Korean house in 1900s until development of heating technology and appearance of many energy-efficient system.

The traditional Korean fireplace in the kitchen is the starting...

The traditional Korean fireplace in the kitchen is the starting point of heating the home in Korean traditional houses, called Hanok. This under-floor heating system, called Ondol, is used to get through long, cold Korean winters. The history of Ondol goes back to the Neolithic Age and a campaign is under way to promote it worldwide for its energy-efficiency.

The layout of traditional Ondol

The main parts of the traditional Ondol are a firebox or stove (Agungi; 아궁이) nearby from an closest (typically kitchen or master bedroom) room, a raised masonry floor underlain by horizontal smoke passages, and a vertical, freestanding chimney on the opposite exterior providing a draft. The heated floor is supported by stones to circulate the smoke, covered by stone slabs.

Uh-Cheo-gu-nis on the edge of a roof

Uh-Cheo-gu-ni is a kind of gargoyles. Those Korean gargoyles are decorated on the edge of the roof mainly made with Kiwa(기와). Particularly, they are found in special architectures for royal family. They are made of clays in the forms of the dolls looking like some animals. We can find them if we see the Chosun dynasty’s palaces such as 경복궁. They seems to be modeled after the animals’ of 12간지. However, they are modeled after the 서유기‘s seven main characters including 대당사부(삼장법사), 손행자(손오공), 저팔계, 사화상(사오정) and so on. It was made with peoples hope to keep the building from sky’s demon or ominous event such as fire. 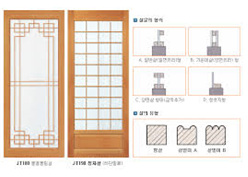 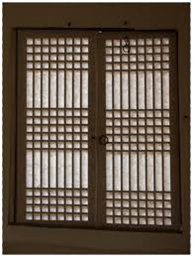 The detailed view of Changhoji-mun (door and window)

The doors in traditional Korean homes and palaces were made with Hanji. If Hanji is glued on the door with wooden frames, it is called a window paper, Changhojie. Some of them are sliding doors and others open inward or outward, which are typical in many door systems. Because of this skill to insulate rooms, Korean keep warm during harsh and cold winter months. Before coming winter, Changhojie is usually changed into new one, and the doors and windows become weather-proof. Also, the doors made with Hanji are beautiful and breathable. Its durability enables our Korean to use it in many ways. 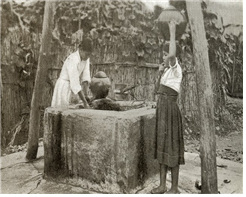 The Umul, in Korea in old times

As we all know well, nature give rain and it flows into rivers or soaks into the ground to form underground water. We rely on the water-body to support our lives. In old times before back in the 1800s, most Koreans had a well called Umul usually at the center of their front or back yards. The Umul was not only the source of water but also the special place to pray for family members who had difficulties or hardships or tried to pass big tests or competitions. Furthermore, Umul has been the source of some mysteries or tall tales passed down to us.

After learning the background knowledge of architecture in terms of science and art, we could have a great opportunity to explore one of our own heritages, Hanok. While exploring the characteristics of Korean traditional architecture of Hanok, we have learned that those features reflect our culture as well as physical appearance of Korea. Depending on how the weather is, how we make a living, and how we interact with our nature, we can develop many different kinds of housing including our natural resources around us. We believe Hanok is also the outcome from the interaction with nature and our ancestors as time goes by.

On the slopes of Mount Gaya, is the home to the most complete collection of Buddhist texts. It was engraved on 80,000 wood blocks between 1237 and 1248. The buildings of Janggyeong Panjeon, dating back to 1400s, were built to house those wood blocks. They are also revered as exceptional works of art in the world as well as in Korea.

As the oldest depository of the conservation techniques used, the Haeinsa Tripitaka wood blocks were carved in an appeal to the authority of the Buddha in the defense of Korea against the Mongol invasions in history. They are recognized by Buddhist scholars around the world for their accuracy and outstanding quality.

The wood blocks are known valuable for the delicate carvings of the Chinese characters. The Janggyeong Panjeon includes two long and two smaller buildings. They are arranged in a rectangle around a courtyard. As the most important buildings in the Haeinsa Temple complex, they are located at a higher level, constructed in the 15th century in the traditional style.

The four buildings are thought to be unique. They are well-known for their antiquity with its specialized structure and for the remarkably effective conservation solutions. These were selected in their design to protect the wood blocks from deterioration. Also, they provide for easy access and storage. They were specially designed to give natural ventilation and to adjust temperature and humidity. they are adapted to climatic conditions. So they can keep the wood blocks for some 500 years from pests. The Haeinsa Temple complex is a famous destination for pilgrimages, not only among Korean Buddhists, but Buddhists and scholars from all over the world.

The depositories were built in the traditional wooden architectural style of the early Chosun dynasty. They are exceptional not only for their beauty but also for their scientific layout, size and efficiency to preserve the wood blocks. 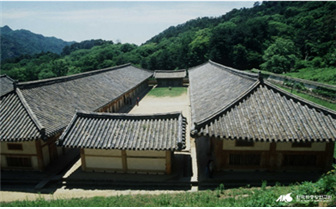 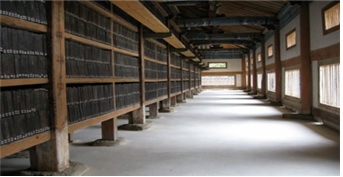